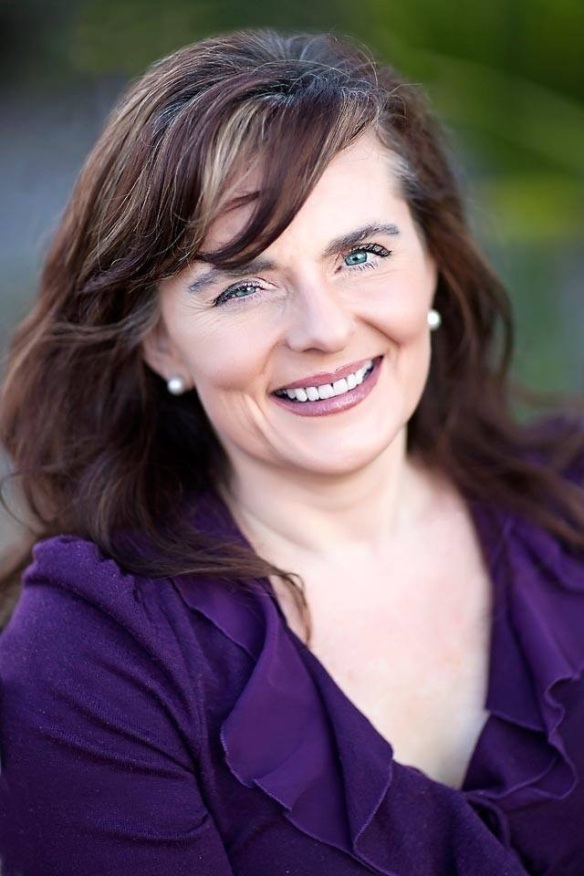 Tania Marshall, M.Sc. (App. Psych.), is a 2019 and 2017 ASPECT Autism Australia National Recognition Awards Nominee (Advancement category). She was also recognized by Autism Australia in both 2016 and 2015 for her work advancing the field of female Autism and Neurodiversity. She is the Author of “I Am AspienGirl: The Unique Characteristics, Traits, and Gifts of  Females on the Autism Spectrum”, Foreword by Dr. Judith Gould, and “I Am AspienWoman:  The Unique Characteristics, Traits, and Gifts of Adult Females on the Spectrum, Foreword by Dr. Shana Nichols. Tania is a Gold medal winning and best-selling author, a mental health consultant in clinical services, an Autism Consultant and a Secret Agent Society (SAS) Trained Group Facilitator. For further information go to Vimeo at https://vimeo.com/neurodiversityacademy or YouTube at https://www.youtube.com/channel/UCk_kFdaPkv4w0ieOgfR3IvA 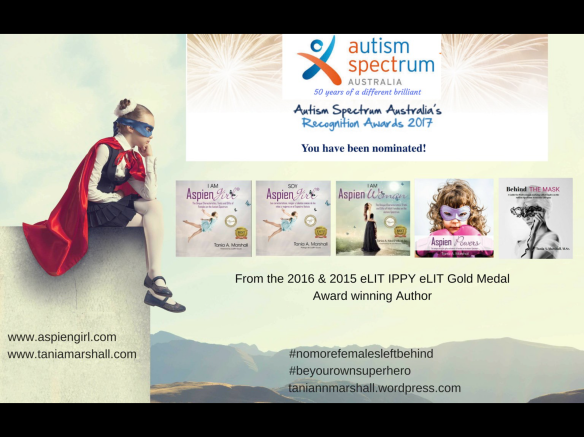 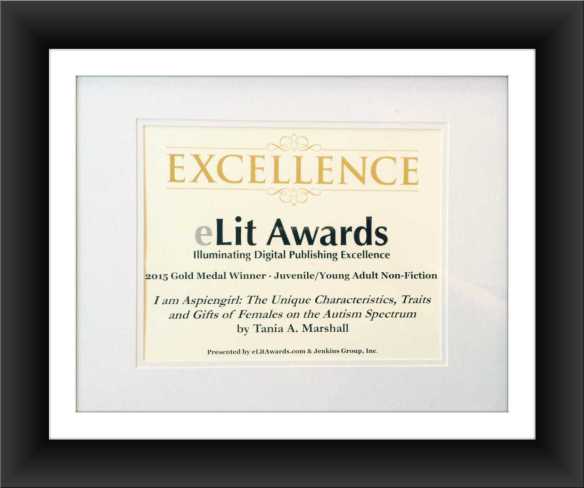 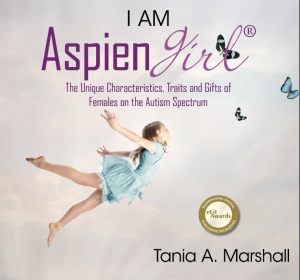 I AM AspienGirl wins a 2015 eLIT GOLD Medal 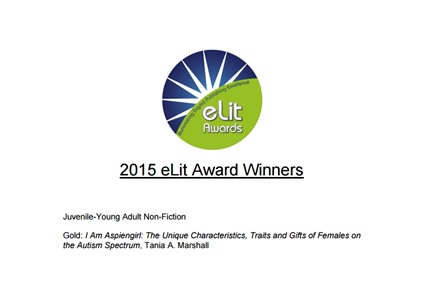 2015 eLIT Gold Medal Award for I Am AspienGirl 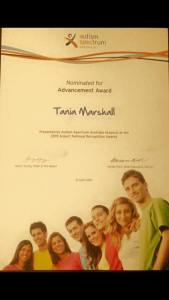 Tania Marshall has worked in the field of psychology for 20 years (in a variety of roles, environments and contexts), with children, teens and adult with developmental disorders, Autism and related disorders, across the lifespan. She has supported many neurodiverse individuals with Asperger Syndrome/Autism and related conditions. Tania participated in a Doctoral-level pilot in the area of Adult female autism in 2014. She is a nationally recognized psychologist and provides diagnostic assessment impressions, support, intervention, problem-solving sessions and/or consultations via Skype or in-person. Tania is an approved Medicare Registered Provider of Psychology Services, an approved APS Identified Autism Practitioner, a Helping Child With Autism approved provider, a Better Start for Children with a Disability Provider and a trained Secret Agent Society (SAS) Trained Group Facilitator. Currently Tania divides her time between full-time private practice, writing her book series and research. Tania’s work has been translated and/or cited in numerous publications including Sarah Hendrickxs’ recent release entitled “Women and Girls with an Autism Spectrum Disorder” (June, 2015).

Twenty years ago, Tania volunteered at an out-patient day centre and worked with adults with a variety of conditions, including schizophrenia, bi-polar disorder, and also what would now be known as adult Autism and Asperger Syndrome. Tania then attended University, receiving her Bachelor of Arts, majoring in Psychology. During that time of working on her initial degree, she also was a psychology research assistant (Autism and related developmental conditions and childhood disorders) and spent three summers working at a special needs camp, in the capacity of camp counselor and then as a psychology assistant. She had worked with many individuals on the Autism Spectrum.

Tania then completed a Masters of Science degree. During her Masters degree training she completed a supervised internship at a Children’s Hospital in the ADHD/Disruptive Behavior Disorder Clinic, where received training, experience and assisted in assessing, diagnosing, supporting and providing intervention to children and their families affected by ADHD, Autism and related conditions. During that time she was a recipient of three scholarships and three teaching assistant positions. Her Masters degree involved the completion of 12 courses in addition to an original supervised Masters’ level thesis.

After the completion of her Masters of Science degree (Applied Psychology, Developmental/Educational psychology), she then completed a supervised 18-month post Masters externship (supervised by a Clinical Psychologist) at a private special needs school for children from Grades 1-12, who were “at-risk”, had dropped out of school, been suspended, were in foster care, abused, and/or had a variety of disorders and/or conditions. Some of her duties included: providing diagnostic assessments, psycho-educational assessments, psychological assessments, intervention, support and therapy, family therapy, report writing, stakeholder meetings and visits to hospitals to see students and/or other professionals. She supported students of all ages, both genders and their families, all with a wide variety of conditions, learning difficulties and concerns. She worked with many students with Autism or Asperger Syndrome. She also completed an 18-month post-Masters externship in private practice, supervised by a Clinical Psychologist.

Since then,Tania has worked in private practice, providing a wide variety of assessments and services to people of all ages. She has now worked with hundreds of neurodiverse individuals.

Tania Marshall was invited to be interviewed about her role and impressions as a Secret Agent Society Social Skills group program facilitator, and what benefits she had noticed, with the children she taught specific groups skills to. This program was created and developed by Dr. Renae Beaumont. This interview can be viewed at http://www.sst-institute.net/au/parents/testimonials/ 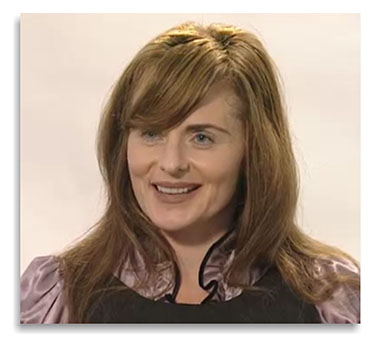 Invited to be interviewed about the Secret Agent Society Social Skills Program by the creator, Dr. Renae Beaumont http://www.sst-institute.net/au/parents/testimonials/

Tania wrote and published her first book in a series on Asperger Syndrome and Autism in girls and women, June 2014. It became a #1 best-seller in 3 categories as an e-book and is available in paperback and hardcover editions at http://www.aspiengirl.com

I Am AspienGirl, #1 Best Seller 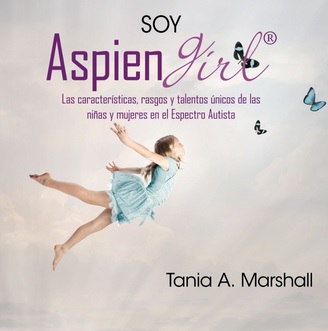 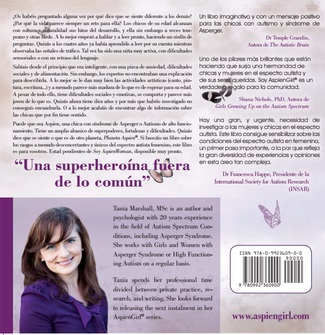 Further translations are in production.

The sequel to Tania’s best-selling book, entitled “I Am AspienWoman: The Unique Characteristics, Traits and Gifts of Adult Females on the Autism, Spectrum, Foreword by Dr. Shana Nichols, continues on where I Am AspienGirl left off, including a large Mentor section lead by Dr. Temple Grandin. 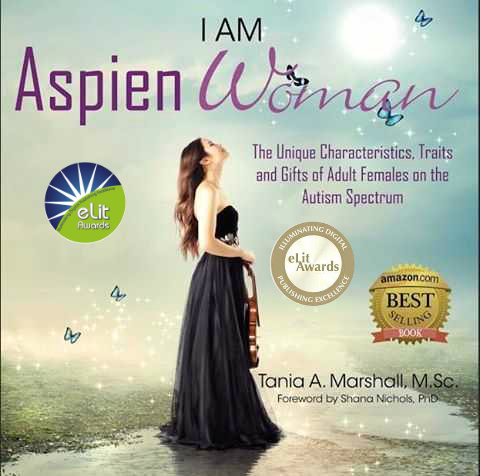 Tania is now writing her third book entitled AspienPowers: The Unique Constellation of Strengths, Talents, and Gifts of Females on the Autism Spectrum and released mid-2017 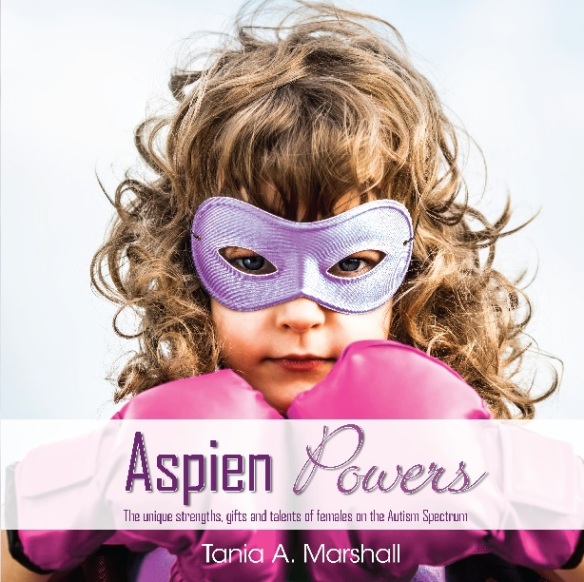 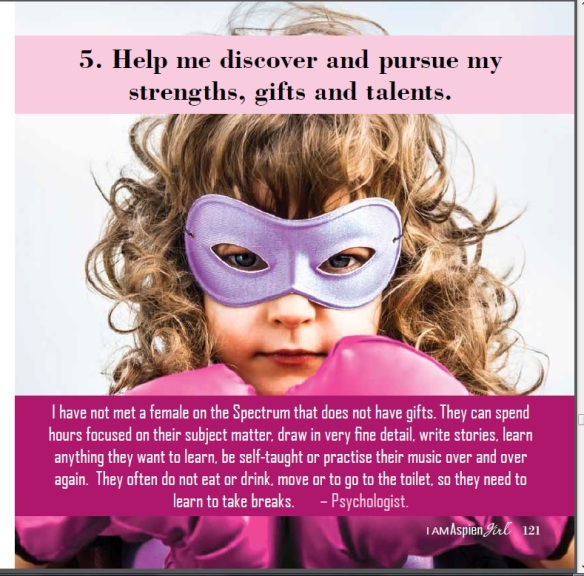 Tania has received many requests for a “boy” version of I am AspienGirl and is now writing I Am AspienBoy. 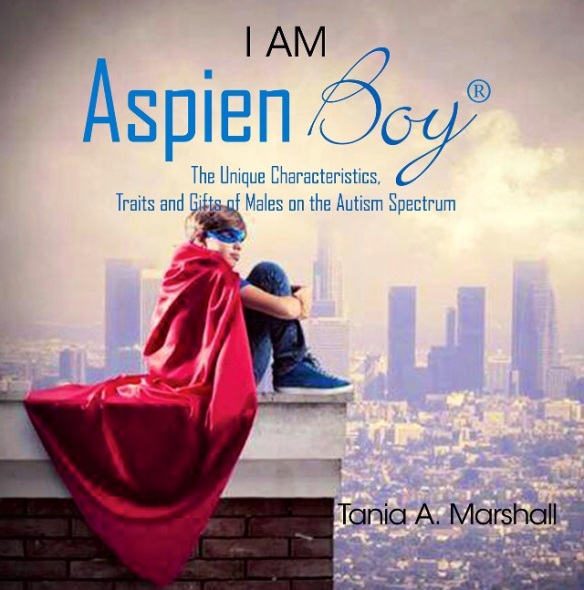 I Am AspienBoy: The Unique Characteristics, Traits and Gifts of Young Males on the Autism Spectrum, currently being written and Coming 2015

Tania’s fifth book is entitled Behind The Mask: The Narratives of Females on the Autism Spectrum, Coming late 2015 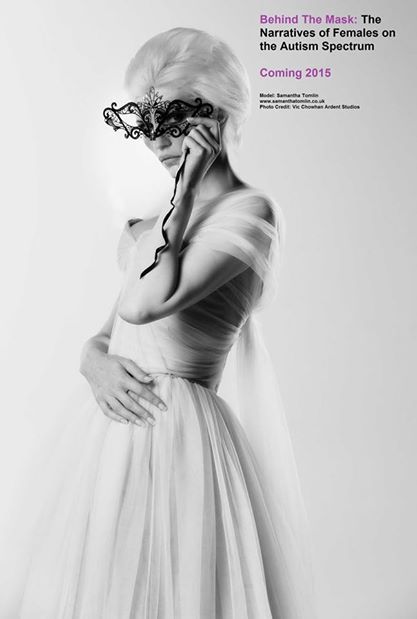 Behind the Mask: The Narratives of Females on the Autism Spectrum, by Tania A. Marshall. Model: Samantha Tomlin, Photo: Ardent Studios

The Highlights of Tania’s professional career to date include meeting and talking one on one with Professor Temple Grandin, the honour of interviewing Professor Uta Frith, Dr Judith Gould providing the Foreword for her first book, I Am AspienGirl, Dr.Shana Nichols providing the Foreward for I Am AspienWoman and testimonials by Dr. Temple Grandin, Dr. Francesca Happe and Dr. Shana Nichols. In addition, Tania is proud to be honoured with nominee recognition awards by ASPECT Autism Australia from 2017-2015. 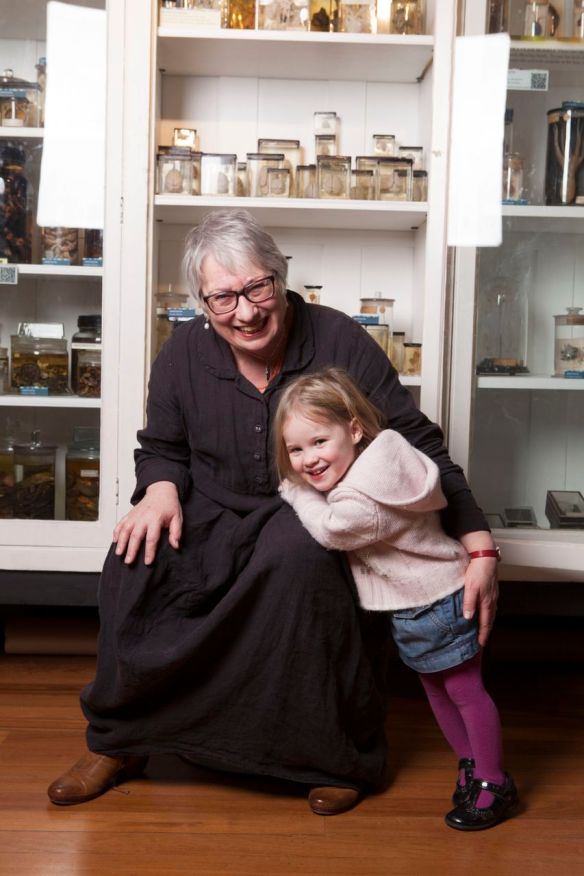 Photo of Professor Uta Frith and her grand-daughter, provided for an interview with Tania Marshall, available at https://taniaannmarshall.wordpress.com/2013/06/27/professional-interview-series-professor-uta-frith/

Tania attends on-going professional development, whether that be seminars, workshops in-person or presentations/workshops online. She attended a one-day seminar by the Autism Centre of Excellence, Autism Seminar Series – 2, April 2013, at Griffith University, whose presenters included Professor Tony Attwood, Rachel Harris, and Professor Jacqueline Roberts
(Making school work for girls on the autism spectrum, outlining a project in Far North Queensland working with school communities to improve outcomes for students on the autism spectrum).

Tania attended Dr. Ross Greene’s “The Explosive Child” Seminar, and briefly met and discussed children with Autism with him.

Tania also attends numerous on-line presentations, conferences, and workshops pertaining to Autism. For example, “What we do, don’t and must know about Autism Spectrum Conditions” and “SFARI Webinar: Francesca Happe presents ‘fractionated triad’ model”, The erosion of empathy: Simon Baron-Cohen at TEDx. 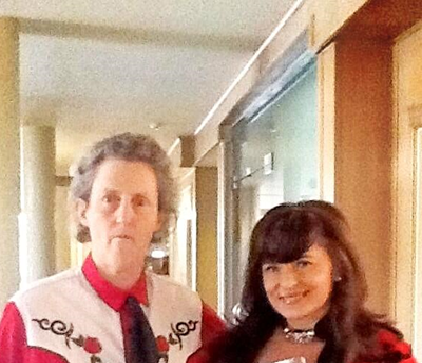 Meeting Dr. Temple Grandin, a highlight of my career

Tania provides assessment services, interventions, and support to individuals across the lifespan from a variety of countries. She has practiced in both Canada and Australia, providing services to individuals and families affected by Autism, Asperger Syndrome, Giftedness and genius, depression, anxiety, panic attacks, high sensitivity, learning disabilities and elite athletes/performers. Tania also provides diagnostic impressions assessments, intervention, and support in her private practice and/or via Skype and works with professionals from a variety of areas, including medical doctors, psychiatrists, social workers, speech pathologists, occupational therapists, counselors, guidance officers and psychologists. 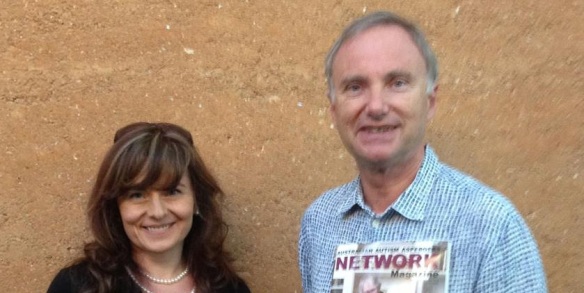 Tania attended the NOVA pathways to employment seminar, where she was privileged to meet a number of the following amazing people. 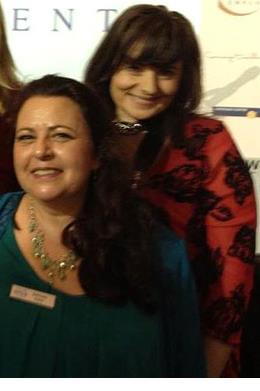 Berinda Karp and Tania Marshall at the Nova Employment Conference 2013. 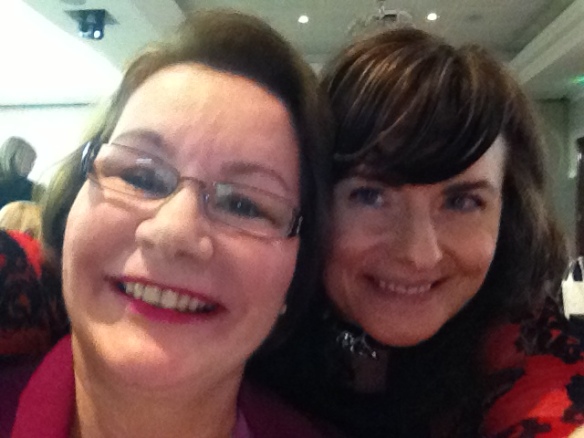 Embracing the Other Half Psychology Clinic (ETOH) Dr Julie Peterson (Clinic Director) and I. 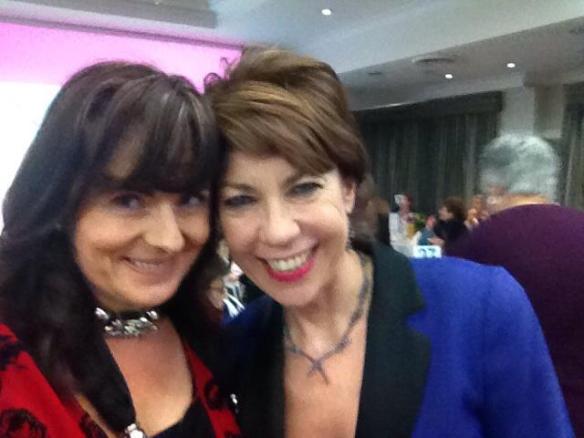 Tania Marshall and Kathy Lette, one of the funniest women I have ever met.

Tania Marshall and Kathy Lette recently met at the “up close and personal” luncheon hosted by Nova Employment in benefit of the Asperger Centre. The attendees enjoyed a five-star meal at the Epping Club, whilst hearing from inspirational guest speakers and best-selling authors Professor Temple Grandin and Kathy Lette. Temple Grandin’s latest book is called “The Autistic Brain” and Kathy Lette is an Australian author who has written a number of bestselling books including “Puberty Blues” and “The Boy who Fell to Earth”.

Best-Selling Author Kathy Hoopman and Tania Marshall recently met to discuss Asperger Syndrome, her fabulous book series, and the female profile of Aspergers. Kathy’s most popular books include:
All Cats Have Asperger’s
All Dogs Have ADHD
Inside Asperger’s Looking Out 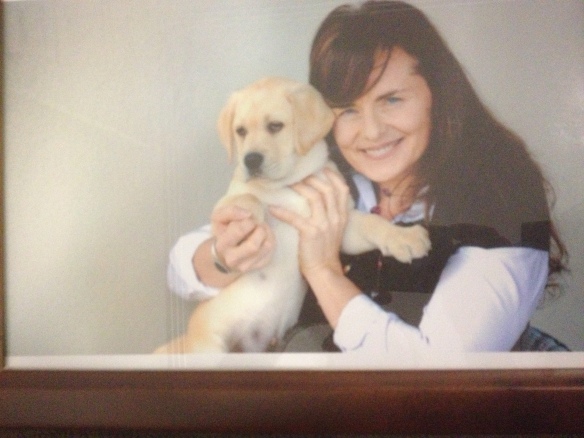 Tania highly recommends the use of Autism-assistance dogs in her work with particular clients and finds that Autism service dogs are well-trained and proficient in helping their handlers process sensory information. Many autism service dogs are trained in work/obstacle avoidance (similar to a guide dog) to help the handler with visual stimuli.
Some of Tania’s clients bring in their own animals (dogs, cats, and guinea pigs) into the session. Tania also has her own Labrador retriever which she uses with her child and adult clients.

Autism Service Dogs are Trained to Respond to Certain Behaviors:
For example,

Tania is also writing a series of books and maintains her blog of her own free time. Due to time commitments, Tania is only available for fee-for-services appointments/inquiries which can be made by contacting her personal assistant at admin@aspiengirl.com 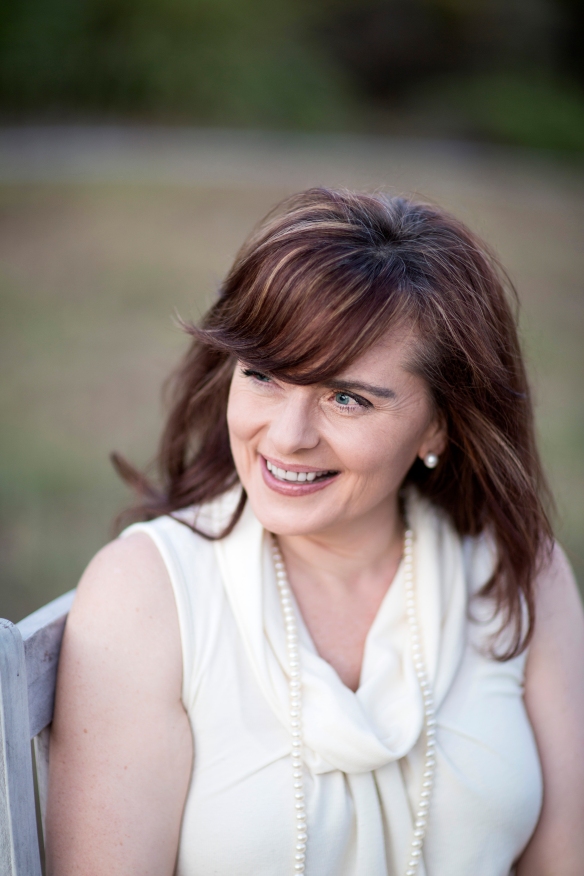 Tania has completed a series of interviews, which include:

Tania can be found at: